- the corner of Harbour and Duke Streets in the early 1760s, drawn by Pierre Eugene du Simitiere.

While looking, in the Gleaner, for something totally unconnected - as often happens - I  glimpsed the unfamiliar property name 'Pelong Pen' in one of the advertisements below, the one from 1870, I think. I was able to find one reference, on Jamaican Family Search, to the property, then owned by Moses Silvera, in 1840. I was intrigued as to the possible origin of this unusual name, which sounded as though it came from somewhere in South-East Asia, which seemed rather unlikely. The other option was probably a family name, so I looked for that, and the result of that search is taken up further down the page. 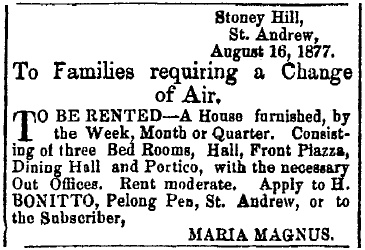 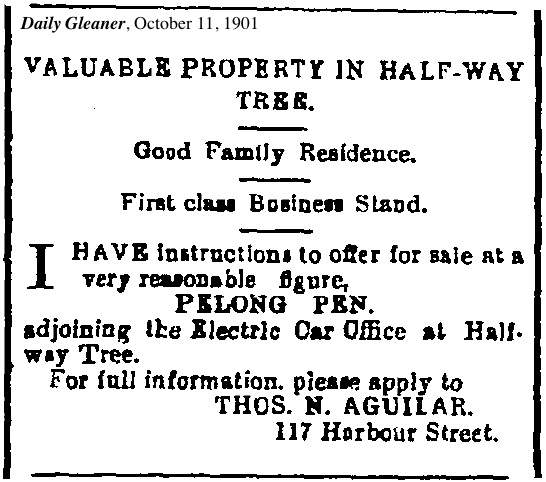 Is 'Pelong' a surname found in Jamaica?
I have only found the surname 'Pelong' in records twice so far, in Jamaica, though the name seems fairly common in Michigan in the USA. Someone researching the surname on-line, suggests that it was probably an Anglicised misspelling of a French name, from Canada, - the name suggested was Pilon, of which there were numerous examples in Jamaican records.
Records of slave baptisms:

Demiramus Whiteman, formerly Pelong, the mother on this birth certificate:
1891

but Semiramis Wightman, formerly Pilon, in 1903 -

'Pilon' - the name in Jamaica:

The first Pilon found so far, arrived in Jamaica as a French prisoner during the Revolutionary War of the 1790s -

I will do some more searching for members of the Pilon family in Jamaica over more than two centuries, but it is good to note the career of a current member of the family, ﻿
﻿﻿Michel 'Mitch' Pilon﻿﻿